M74 a Galaxy in Pices

M74 is a Grand Design Spiral, face-on, galaxy in the constellation of Pisces located about 32 million light years from Earth. A grand design galaxy has arms of the galaxy that are well defined and extends clearly around the galaxy.
This was imaged using a combination of cameras and telescopes. I imaged the luminance with the QSI 683 wsg-8 and the color data was imaged with a modified Canon T1i in 2011.
Imaged from Ocala, FL
Six min exposures stacked in DeepSkyStacker for a total of 5 hours 43 min using a modified Canon Ti1 (RGB data).
Six minute exposures totaling 1 hour and 30 min in Luminance using a QSI 683 wsg-8 CCD camera.
Processed in Photoshop CS5
Imaging telescopes: Astro-Tech 6" Ritchey-Chrétien (RGB from 2011) and Astro-Tech 8" Ritchey-Chrétien (Luminance from 2013)
Imaging cameras: Modified Canon T1i (RGB data from 2011) and the QSI 683 wsg-8 (Luminance from 2013)
Losmandy G 11 with Gemini II
© Coates Astrophotography 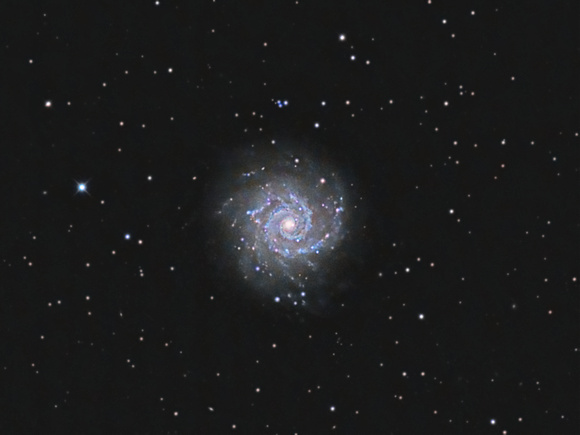