NGC 7293, the Helix nebula, in the constellation Aquarius measured to be 700 light years from Earth. This was imaged late in September and into October from my light polluted skies, using Ha and OIII filters. The Helix nebula is a planetary nebula and was named so based on the appearance of a helical structure from the vantage point here from Earth. The colors are from gas expelled from a dying star. As a star fuses all of it's hydrogen at the core and begins to fuse helium, the outer shell becomes much cooler than the core and the gravity from the star can no longer hold it near therefore expelling the outer shell. This process will continue until a dim ember of a star, a white dwarf, is left.
Ha 20min subs totaling 1 hour and 20 minutes.
OIII 20 min subs totaling 2 hours.
Imaging camera: QSI 683 wsg-8
Losmandy G11 Gemini II German equatorial mount.
Imaging telescope: Astro-Tech 8" Ritchey-Chretien with a focal length of 1625mm (f/8)
Taken September 26 and October 5, 2013 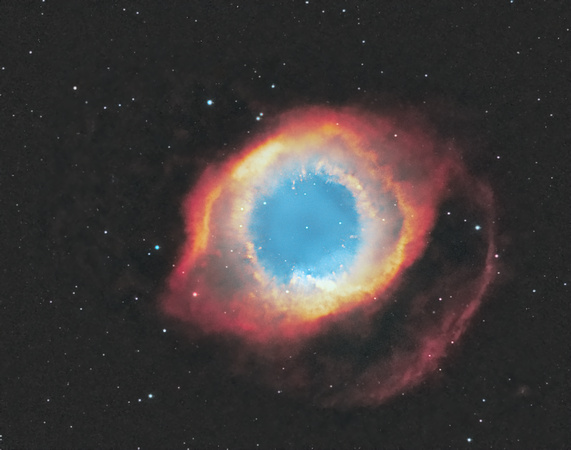